Here’s a traditional “meze,” or Middle Eastern appetizer, that I learned from my friend “Kalo,” a Turkish chef and restaurant owner in Decatur. I used to hang out at his place when I was free on Saturday afternoons, and served as “Guest Chef.” The time working with Kalo and several other guys there influenced my cooking considerably, both at home and at our family restaurant in Athens, Donderos’ Kitchen. 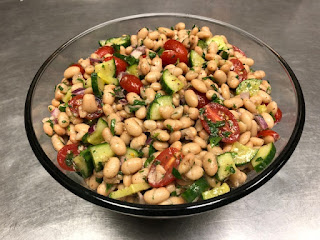 The dish is completely “vegan” or (as the new term is emerging) “plant-based.” The freshly grated ginger and the cinnamon give the dish its exotic and slightly “meaty” overtones. We make a similar, though slightly different, white bean salad for catering at Donderos’ Kitchen.

The recipe serves six to eight as part of an appetizer selection, or about six as a side dish.

Drain the beans, rinse them in running water, and drain again. Place them in a large bowl with the onion, garlic, ginger, salt, dry seasonings, lemon juice, and olive oil. Mix gently so as not to break the beans. Allow to marinate for at least 10 minutes, stirring occasionally. Add the cucumber, tomato, parsley, and cilantro. Stir in and allow the mixture to sit several minutes.

Taste a bean and cucumber piece and a little dressing. Add salt and/or lemon juice if necessary for full flavor and light tanginess. Ideally, let the salad sit at least 20 minutes before serving. (Refrigerates well for up to 8 hours.) Taste one last time before serving and adjust seasonings if necessary.

Serve in a shallow dish, or several small low bowls for a meze table. Garnish by sprinkling with a little paprika, and arrange a few black olives on and around the salad.