Lentil and Tomato Dip, and a bit of history

I often fix appetizers for my daughter Maria’s pottery shows, at which it’s customary to offer light food for visitors to the gallery. A while back I started using lentils in some of these dishes, for a reason that is not at first obvious.

Lentils are one of the earliest crops in human cultivation, at least in the Fertile Crescent. They were so important a part of human cultivation and nutrition that they even play an important role in Genesis, which metaphorically recapitulates human history.

Esau, the elder son of Isaac, and heir to the patrimony of Isaac and Issac’s father Abraham, was the hunter. The younger son, actually Esau’s fraternal twin, Jacob, was the farmer. Thus the twin brothers symbolize the hunter-gatherer vs farmer dichotomy of the Neolithic period of human development. Esau had been unsuccessful in hunting at one point and, starving, implored Jacob to give him some lentils to eat (they were apparently red lentils). Jacob forced a hard bargain on his twin brother and traded Esau a pot of lentils for the family birthright. Thus for a pot of lentils, Israel became the House of Jacob rather than the rightful House of Esau. The ethics of this bargain I’ll leave to rabbinical scholars. I’m primarily interested in the scriptural references to pottery and lentils.

Pots in which to actually boil lentils only became available with the advent of terra cotta pottery in the late Neolithic period. Prior to that technological advance lentils were more marginal, needing to be ground and fried as a bread or cake on a hot stone griddle. Thus pottery enhanced lentils’ usefulness to human nutrition and survival, and lentils in need of cooking enhanced pottery’s practical value. Lentils and terra cotta pottery thus co-evolved and helped spur the Neolithic agricultural explosion. 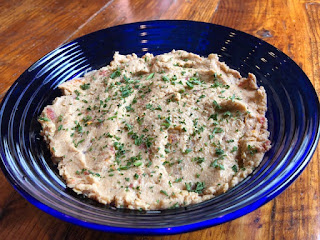 Of course, the other reasons I do lentil-based appetizers for Maria’s shows is that they are suitable for vegetarian eating, which is common in the circles that frequent pottery and art gatherings, they are quick to cook, and they are as economical as they are nutritious. And I love the taste, if not the dull appearance, of lentils.

Here’s a lentil dip I made recently for one of Maria’s events, though this was a birthday gathering rather than a pottery exhibit. Garnishes improve the visuals of a lentil dish.

The recipe serves 10 or more as part of an appetizer selection, with somewhat over a quart of dip. Offer lightly salted crackers or chips for serving.

Rinse the lentils several time in cool water and drain. Soak them in a cooking pot with water to cover them by half an inch and let them sit for half an hour or more. In a small bowl, mix finely chopped sun-dried tomatoes with wine, and allow to marinate, stirring from time to time.

Place pot with lentils and their soaking water over medium heat and bring to a boil. Simmer the lentils, stirring frequently and scraping the bottom of the pot (they tend to stick), adding small quantities of water to keep lentils moist, with the water level just below the surface of the lentils.

When lentils become tender (15-20 minutes) add the marinated dried tomatoes plus any juices, the tomato paste, salt, and dry spices. Stir frequently, scraping the bottom of the pot, and simmer until lentils are fully tender but still intact.

Remove from heat and stir in sour cream. Taste and add a little salt if needed. Let cool.

Serve in a shallow bowl. Dust with finely chopped parsley. Accompany with low-salt crackers or chips.