Eggplant Parmesan, or Melanzane alla Parmigiana, may have originated in Sicily, though it is now more associated with the Naples region. The province of Parma, and the wonderful cow’s milk cheese Parmigiano Reggiano, named for that province plus the neighboring province of Reggio Emilia, are northern Italian. But the baked eggplant dish, despite the northern name and typically being seasoned with that northern cheese, is classically southern Italian in style with vibrant tomato sauce playing off against cheese and breaded “meaty” vegetable and olive oil. Several later variants of the originally eggplant dish, which substitute thinly sliced breaded meat for the sliced eggplant, include Veal Parmesan and Chicken Parmesan. 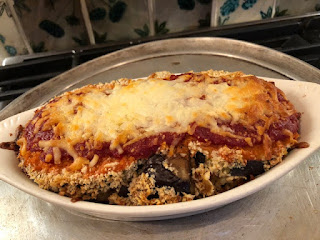 As wonderful as eggplant can be, it has several unpleasant characteristics to overcome. The bitterness from traces of nicotine-like alkaloids (eggplant is related to tobacco, after all) needs to be salted out or roasted out. Eggplant also requires proper cooking to not be rubbery or spongy or have tough skin.

For a large casserole dish of Eggplant Parmesan you will first need to make a tomato sauce (sometimes confusingly called “Marinara” – sailor’s sauce) and grate mozzarella cheese plus a little Parmigiano cheese or Romano cheese -- which I prefer, but I grew up around Sicilians.

The Sauce:
3 extra large cloves garlic
1/4 cup olive oil
1 large can (28 ounces) crushed tomatoes (Hunts brand or Progresso are good)
3/4 cup water (rinse the tomato can with it before adding to the cooking)
2 1/2 teaspoons sugar (amount will depend on the acidity of the tomatoes)
1/4 teaspoon paprika
1/8 teaspoon ground cloves
Salt to taste (1/2 - 1 teaspoon or more)
2 large fresh basil leaves

Crush the garlic (press under a drinking glass or with the side of a knife) and remove the skin. Fry the garlic slowly in the olive oil in a large non-corrosive pot (enamel, stainless steel, etc.) until just starting to turn golden. Remove and discard the garlic pieces.

Add the tomatoes, water, sugar, paprika, cloves, and a little salt. Bring to a rapid boil, stirring frequently, and let simmer 3 minutes, stirring occasionally.  (Partially cover the pot, since the tomato splatters; move pot from the heat before stirring to reduce splatter.) Taste and add salt if necessary, and a little more sugar if too acidic. Stir in the basil and remove from the heat.  Let cool. (Stores in refrigerator up to 5 days or freezes up to several months.)

Cut off stem end and the very bottom of eggplants. With a vegetable peeler, peel a narrow strip off from top to bottom on four sides of the eggplant. Slice eggplants crosswise 3/8-inch thick. In a large bowl dissolve the 3 tablespoons salt and about three quarts of water. Immerse the eggplant slices, and mix them around occasionally, and soak them for 30 minutes or more to get out the bitter juices.

In a bowl, beat the eggs with a fork. In a separate bowl, mix the flour, 1-1/2 teaspoons salt, pepper and nutmeg. In a third bowl place the breadcrumbs.

Drain the soaked eggplant slices. Dredge them a few at a time in the seasoned flour. Tap them to shake off excess flour and dip them in the egg, shake off the excess then put them in the breadcrumb bowl to lightly coat them, Tap the slices to shake off excess crumbs. Place them on one of several baking sheets (lined with parchment paper if available), close but not touching.

When all slices are breaded, drizzle them each with a little olive oil. Bake them in a 350-degree oven 15-20 minutes, or until starting to turn golden and become tender to the touch. Let cool.

Smear some of the tomato sauce to wet the bottom of a large, attractive 10-by-13-inch baking dish (or several smaller ones), from which the eggplant will be served. Place almost half the roasted eggplant slices tightly together or slightly overlapping to cover the bottom of the casserole. Cut some eggplant slices into quarters to fit into the spaces around the edge. Sprinkle half of the mozzarella and half the other cheese over the eggplant. Spoon about half the remaining sauce evenly onto the cheese layer. Place the second layer of eggplant (it will be the top layer) onto the first layer, using up the eggplant slices except for a few to cut to fill in spaces. Spread the remaining sauce over this layer, then sprinkle the remaining cheeses on top.

Bake on the lower shelf of the oven until bubbling on the edges and the cheese on the top browns somewhat, 35-45 minutes. Turn the dish once or twice during the baking.

Serve hot with a salad and crusty bread.