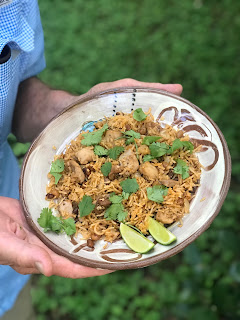 Cooking meat with rice, vegetables, and seasonings goes back to ancient Persia, where the dish was termed “polo.” This became “pilaf” when it travelled west with the Turks and “pulao” when the Mughals took it east into India. Pilaf is the term used in the Arab countries as well as Turkey. The cooking method (as well as rice) came to Spain during the Arab/Moorish period in the Middle Ages. From that introduction it has since evolved into Paella (where seafood and vegetables are cooked with the rice and saffron in a wide, shallow cooking pan called the “paella”) and travelled to the New World as chicken cooked in rice, “Arroz con Pollo,” and even influenced Louisiana’s “Jambalaya.”

Here’s a version of Arroz con Pollo from the Caribbean, where pigeon peas (“gandules” in Spanish, “pwa” in Haitian Creole), beans, or other legumes are added to the chicken in the rice. Annatto seeds, rather than the much more expensive saffron, give the yellow color. The recipe looks fussy, but ultimately this is a one-pot dish.

The recipe serves six to eight, but leftovers keep well and reheat well in the microwave.

Make chicken broth with chicken bones and skin. Skim off fat, and strain broth through a sieve. A recipe of the rice will require about 3 cups of broth. Commercial chicken broth can be used, but try to get the low-salt variety.

Cut off (and save for cooking) excess fat and any tough parts from chicken. Cut meat into 1-inch pieces. Marinate with the seasonings listed while preparing the remainder of the dish.

The rice
1 tablespoon whole annatto seeds, microwaved in bowl with 3 tablespoons sunflower or canola oil for 1 minute. Then microwave for 20 seconds at a time until orange color is clear in the oil. Strain out seeds before using the colored oil.

Rinse rice well and drain it. Set aside to “dry.”

Heat a large pot and over medium heat and fry the fat and trimmings from the chicken, stirring frequently and scraping the bottom of the pan. Remove golden fried bits. Add enough olive oil, if needed, to total about 3 tablespoons grease in pot. Add onion and Poblano pepper. Fry until starting to turn golden, stirring frequently. Add garlic and fry for 1 minute. Add marinated chicken and fry, stirring often, until raw color is gone. Add frozen (or canned, drained) field peas and tomato or ketchup. Cook until peas are hot.

Open lid, remove bay leaves and cloves. Fluff the rice and serve. Optionally a few chopped cilantro leaves can be sprinkled on the rice. Accompany with lime wedges to squeeze on, plus hot pepper sauce.