It seemed like a good idea at the time.

I’ve always wanted to start a story with that lead-in. But this time disaster didn’t ensue. The idea was frying cheese, and it succeeded. 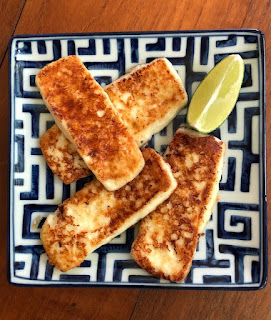 The reason I started was practical. I wanted to reproduce the fried cheese I ate at a long-gone Greek restaurant in Atlanta, back when those places were still owned by people from the Old Country. It was so I could include the dish in a cooking class on Mediterranean appetizers. It wasn’t merely fried cheese I had experienced years ago. It was a spectacle. Cooked at tableside, the golden-crusted slab in its little frying pan was then doused with Metaxa brandy. Then, the decidedly non-Greek young waiter held it aloft, set it aflame, and gushed, “Opa!”

Despite the ersatz trappings, the cheese was wonderful. It lurked in my memory. That fried cheese, I learned later, is called “Saganaki” [sa-ga-NA-kee]. Despite sounding Japanese, the authentically Hellenic name derives from the shallow two-handled pan in which Greeks fry such dishes. Fried cheese is not usually flambéed in Greece. That bonus act of pseudo Greek drama is more a feature of North American Greek restaurants wanting to show off.

Cheeses suitable for frying differ from melting cheeses. They soften but hold their shape. The classical Saganaki cheeses are Kefalograviera, Kefalotyri and Kasseri from Greece and Haloumi from Cyprus. Made from sheep’s milk or sheep’s milk mixed with goat milk, they are expensive but delicious. That’s the sort of cheese I employed in my cooking class.

Subsequently, having started to fry slabs of cheese, I learned that it’s not just Greeks who do it. Some Latin American cooks also pan-fry cheese.

So I tried Mexican and other Latin American style cheeses -- with success. The fresh cheeses (Quesos Fresco, Blanco, Panela and “de Frier”) work well – but not the “melting” types (Quesos Quesadilla, Asadero and Oaxaca). Being made from semi-skimmed cow’s milk and often from Wisconsin, they’re inexpensive, if not quite as tasty as the imported Mediterranean cheeses. 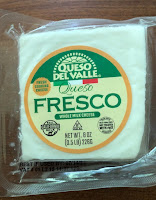 The keys to success with fried cheese are to get the lightly oiled pan medium hot (not smoking) before frying a few pieces at a time and using a thin spatula to slide under the frying cheese to separate its crust from the pan and keep it attached to the cheese. And before placing the cheese on the pan, dust the cheese pieces lightly on both sides with flour (or cornstarch, if avoiding gluten).

The recipe serves six as a substantial snack or hors d’oeuvre. The setting is informal with diners near the stove so the cheese can be eaten quickly after it’s fried in small batches. For Greek cheeses, lemon juice is squeezed over it when serving; for Latin American cheeses use lime juice. A light dusting of freshly ground black pepper, while typical on Greek fried cheese, works to advantage on the Latin American version as well.

If serving the cheese as snack, accompany it with crusty bread and a medium-bodied red wine with a little acidity, such as an Italian Sangiovese or Chianti, or a Pinot Noir or Beaujolais.

2 to 3 tablespoons flour (or cornstarch) for dredging

2-3 limes or lemons or limes, cut in wedges

Cut the cheese into 2-inch rectangular or triangle-shaped slices about 3/8 of an inch thick.

Place flour or cornstarch on a small plate. Lightly dip both sides of cheese pieces into it and tap off the excess.

Heat a heavy-bottomed frying pan (cast-iron works well), griddle or non-stick frying pan to medium heat. Add a little smear of oil. Sear a few cheese pieces at a time, not allowing them to touch. Using a thin-bladed metal spatula, turn them over when golden brown. They cook quickly.

Remove cheese pieces to a plate. Squeeze on a little lime or lemon juice. If desired, grind a little black pepper on, as well.