Caesar Salad, with or without Anchovies

Named for Caesar and by Caesar at a place run by Caesar, the assertive Caesar Salad, composed of romaine lettuce and herbed croutons tossed with a rich anchovy aioli and sprinkled with shredded Parmesan, is a particular favorite in my family. But this classic is hardly from Ancient Rome. It was developed in the mid-1920s in … (wait for it) … Mexico. 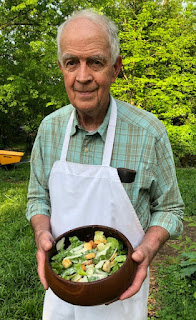 Julius Caesar, the conquering Roman general who fought the Gallic Wars, subdued the Celtic Gauls, invaded Britain, and built a bridge over the Rhine River, subsequently returned to Rome and overthrew the Republic. He established what became the Roman Empire, with himself as “Dictator.” The title “Caesar” was assumed for centuries by the emperors who succeeded Caesar. By extension the name indicated the leadership of the Empire itself. (The Synoptic Gospels attribute to Jesus the skillfully pragmatic injunction, “Render unto Caesar the things that are Caesar’s and unto God the things that are God’s.”)

Long after the fall of Rome, the term “Caesar,” its spelling suitably transcribed, continued as a title of imperial leaders, from the “Kaisers” of Prussia to the “Tsars” of Russia. “Caesar” also became a popular, if aspirational, boy’s name, especially in Italy and Spain. And therein lies the connection between Julius Caesar and the conquering, classical salad that bears his name.

Chef and restaurateur Caesar Cardini, an Italian immigrant to Southern California, who clearly liked his name, created the hearty salad at his restaurant, Hotel Caesar in Tijuana, Mexico, and named the dish after himself. A few minutes’ drive across the Mexican border from San Diego, Caesar’s place in Tijuana was particularly popular with Californians in the 1920s, since there they could dodge the rigors of Prohibition. Caesar Salad became established first in Southern California, then in the country as a whole.

The salad has been through some modifications, and the dressing is generally no longer made fresh by hand aside the customer’s table. But the dressing’s common features still include mashed anchovy, garlic, olive oil, lemon juice, Dijon mustard and egg yolk. The salad ingredients are romaine lettuce, shavings of Parmigiano cheese, and toasted croutons.

Here is my version of Caesar Salad, with a simplified dressing that uses the egg already incorporated in mayonnaise rather than raw, or coddled, egg yolk.

The recipe serves six to eight, but extra dressing keeps for a few days refrigerated (and can also be used as a dip). Make the dressing before making the salad.

1 cup “real” mayonnaise (such as Duke’s or Hellmann’s)

2 teaspoons anchovy paste (use an extra teaspoon if desired, but reduce the salt in the recipe)

Place all ingredients except olive oil in a medium-sized bowl. Whisk everything together. While continuing to whisk, slowly drizzle in the olive oil until all is incorporated. Taste (the garlic will seem peppery for a few minutes) and add salt and/or lemon juice if needed.

Cut lettuce into roughly 1-1/2 inch squares, rinse them in a colander then shake to drain. Transfer to a large salad bowl. Using a vegetable peeler, shave thin strips of cheese into the bowl.

Shortly before serving, toss lettuce and cheese shavings with sufficient dressing to moisten them well. Sprinkle with croutons and mix very briefly. Restaurants sometimes offer a few fresh grinds of black pepper as a topping.