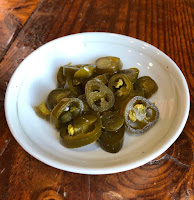 These delightful condiments, which we make at our restaurant, Donderos’ Kitchen in Athens Georgia, go well with breakfast skillets, into breakfast burritos, on garnished grits, or even on burgers and sandwiches. They can also be chopped finely and sprinkled on goat cheese, or cream cheese, for an easy appetizer to spread on crackers. The leftover liquid once the jalapeños are finished can be used creatively as a seasoning or dip – think chicken wings -- also.

Nicknamed “Cowboy Candy” in Texas, the treat is traditionally made from scratch by slicing fresh jalapeños then heating them in a sweetened spiced vinegar broth like classic bread and butter pickles. I make them much more easily, starting with already pickled sliced jalapeños (sometimes called “nachos,” the dish on which they are often served). These are inexpensive and readily available in the supermarket, both in the pickle section and in the “Latin American” section near the salsas. They’re also available at Mexican grocery stores.

Starting with commercially pickled jalapeños, I drain away the pickling brine, keeping the pepper slices in the jar. I make an easy syrup of sugar and water simmered briefly with a few whole spices. Cooled, the syrup is poured into the jar containing the drained jalapeños. After several days in the refrigerator, we have lovely candied jalapeños!

For each pint (16 fluid ounces) of commercial pickled sliced jalapeños:

Drain jalapeños well, but keep them in their glass jar (or if in a can, transfer to a glass jar).

In a pot, bring sugar, water and whole spices to a boil. Simmer 5 minutes. Cool to no hotter than warm. Remove whole spices.

Add the liquid to jar containing the drained jalapeño slices. Cover and tip and gently shake jar to mix well. Let sit for a while. Tip and shake well again. Store refrigerated. Shake to mix occasionally. 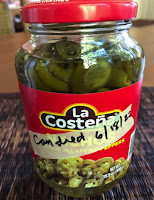 Store at least several days for best flavor. Candied jalapeños can be kept, covered, in the refrigerator indefinitely.