Two days ago I harvested some decorative red kale from the little garden at the back of the restaurant. It had been a visual mainstay during the winter in the ornamental but edible garden that my son-in-law, Clyde, of Hungry Gnome, planted. Before it bolted to seed, and before it was overgrown by the snapdragons that were now bursting forth, I turned it into a savory braised vegetable.

This is the way I have been preparing kale for some time, in the northern European manner rather than stewed as a Southern US “pot herb” green. The leaves and stems of the kale are cooked just until they become tender and are not stewed. (The decorative variety this time, though very tasty, was tougher and needed a little more cooking to become tender.)

Regular curly green kale works well. But even better is the “Red Russian” variety grown locally around Athens by organic farmers in the colder months.

Using a smoked meat, such as bacon or ham is optional. I generally do not use it if the kale is to accompany a meat or cheese main dish.

Rinse kale well in basin of water to eliminate sand or grit. Cut stems, if tender, into 1/2-inch lengths and set aside. Cut leaves in half lengthwise, then cut across into 1 1/2-inch wide strips. Prepare apple and onion. 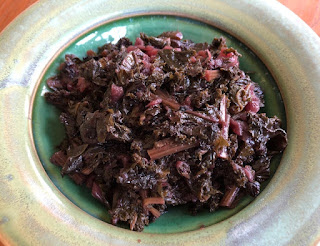 If using bacon, cut raw strip across very thinly (chill in freezer 5 minutes for easier cutting). For ham, cut into 1-inch wide strips, stack them up and cut across into narrow threads.

Heat large frying pan or pot to medium high. Add oil and bacon or ham, if used, and stir and fry 1 minute. Add apple and onion. Fry, stirring frequently, until they are softened.

Add kale stems, and stir and fry 1 minute. Add kale leaves, salt and pepper, and a tablespoon or so of water. Fry, covered but stirring very frequently, until kale is wilted and tender to the bite, adding a little more water as needed to keep a bit of liquid in pan.

Remove from heat. Taste and add salt, if needed. Stir in vinegar and toss to combine well.